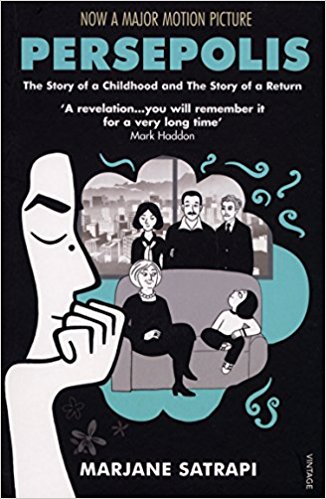 We can only feel sorry for ourselves when our misfortunes are still supportable. Once this limit is crossed, the only way to bear the unbearable is to laugh at it. Marjane Satrapi

Originally written in French and translated (2018 Reading Challenge) into several languages, Marjane Satrapi’s recounts life from childhood to young adulthood during Iran’s Islamic Revolution. As a Bildungsroman, a type of memoir focusing on one’s years of educational or spiritual growth (I learned that skimming the Wikipedia article for Persepolis) she not only discusses the historical events, but what it meant to her as a child and how it impacted her young adulthood.

Satrapi’s story begins just before the Revolution. She lives the best of both worlds. Her father’s job as a government engineer offers a life of privilege and security. Her Uncle Anoosh, a revolutionary, is a source of awe and inspiration giving her cache among her politically aware school mates. Her parents encourage her education and political awakening even as an oppressive force looms in the distance.

The new regime quickly chips away at the people’s freedoms—requiring the veil, segregating schools by gender, jailing and executing those who speak out against the fundamentalists—and erodes Satrapi’s childhood. Eventually, her parents send her to Austria for her safety and well-being. Upon her return years later, she finds she is a foreigner in her own homeland.  She writes, “I was a westerner in Iran, an Iranian in the West. I had no identity.”

Satrapi’s stark images—black and white, no greys—fit the tone and content of her life’s view perfectly. Like most young people, she believes the world should function according to her limited viewpoint. It’s her way or it’s wrong.

She portrays moments of despair—sacrifice, separation and death are companions to war—yet the story never gets maudlin. In fact, like most survivors, she finds humor in the absurdity of her rapidly changing world. She doesn’t dwell too long on the gory details, but she doesn’t shield the reader from them either. War and oppression are not pretty, and life doesn’t go back to normal. The book is surprisingly uplifting in many ways. As the society in which she dwells gets crushed under the weight of a new normal, Satrapi, her parents and grandmother really stay the same. The rebellious fire may have to be hidden, but it still burns.